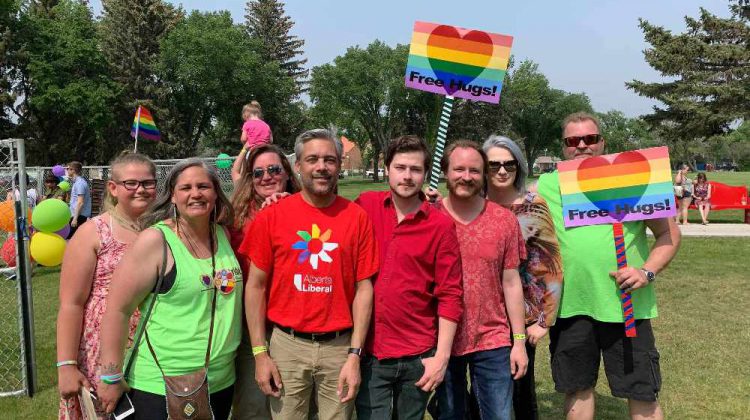 Alberta Liberal Leader David Khan joins recent Lethbridge East Liberal Candidate Devon Hargreaves at Taber Pride Fest. Photo Courtesy of Devon Hargreaves.
The rainbow flag is flying at Taber’s Provincial Building, having been raised Saturday afternoon during the community’s third annual Pride Fest.
The former NDP government first allowed the pride flag to fly at the provincial building last summer after it had been stolen and then vandalized on town property the year before. After those events, Taber Town Council decided against allowing any flag that wasn’t the Town of Taber, Province of Alberta or Canadian flag to fly at town-owned facilities.
Opposition Leader Rachel Notley wasn’t in attendance but did send a video message to the Taber Equality Alliance via Twitter thanking volunteers for their hard work and wishing them “Happy Pride Taber.”
Alberta Liberal Leader David Khan, however, was on hand to speak at the flag raising, saying important progress is being made toward a more inclusive society.
Khan is the first openly-gay leader of an Alberta political party.
He also took the opportunity to sign a letter in support of the Senate Bill S-260 to ban conversion therapy, tabled by Senator Serge Joyal on April 9, 2019.