Piikani Nation partners with AltaLink to invest in transmission infrastructure 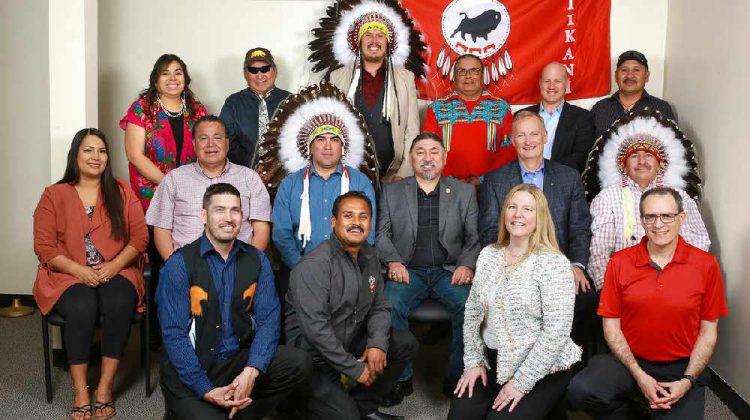 Members of the Piikani First Nation and AltaLink as they announce a new partnership. Photo Courtesy of AltaLink.
The Piikani Nation is establishing an ongoing revenue source for its members by investing in transmission infrastructure on its land.
An application from AltaLink and the Piikani Nation to acquire transmission assets on reserve land was approved last November and commercial arrangements were completed as of June 1st.
The Piikani Nation invested 51% of the equity portion of the transmission line and associated substation equipment and in return the band will earn a regulated rate of return.
Piikani Chief Stanley Grier says “it’s great to see that this Piikani Nation option agreement has finally come to fruition” adding “in order for AltaLink to build the transmission line, they had to consult the Piikani Nation people, and more importantly our traditional knowledge keepers who were entrusted to verify important sacred traditional and burial sites related to Piikani Nation Lands.”
President and CEO of AltaLink, Scott Thon, says the partnership is “a win-win for the people of the Piikani First Nation and for all Albertans because we were able to save millions of dollars for Alberta electricity ratepayers by building a lower cost project.” He says “at the same time, the Piikani Nation is provided with the opportunity to invest in the transmission line on their land and create a consistent ongoing revenue source for their people for years to come.”
AltaLink will continue to operate and maintain the lines.