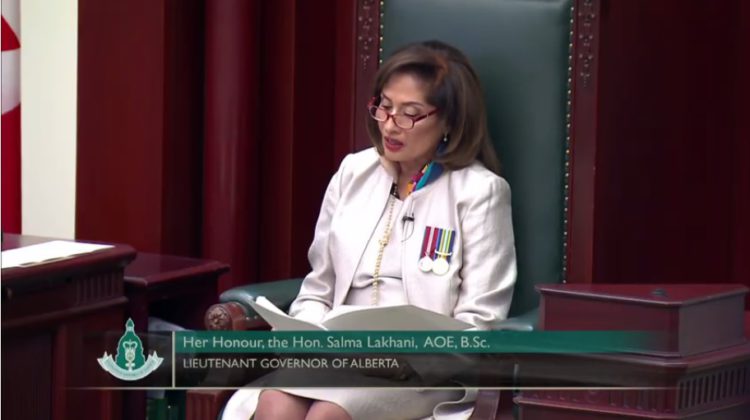 The Hon. Salma Lakhani was installed as 19th Lieutenant Governor of Alberta on Wednesday. Photo credit to Alberta Legislature YouTube.

Alberta has a new Lieutenant-Governor.

Salma Lakhani was installed during a ceremony at the legislature Wednesday afternoon to become the first Muslim in the country’s history to hold the position.

She was born and raised in Uganda and has lived in Edmonton for more than four-decades.

Over the years she’s been awarded the Alberta Centennial Medal for outstanding achievements in the province as well as the Queen Elizabeth II Diamond Jubilee Medal for service to Canada.

In her remarks during the ceremony, Lieutenant Governor Lakhani said, “Mine is the story of a person whose presence before you in this capacity today is made possible, even probable, by a single fact: that it happened in Canada. A place where the realization of unlikely stories occurs not by accident, but by design. While my story may sound unique, it is also the story of Alberta…a place where individual stories are woven into our collective tapestry…a province whose narrative is defined by the generations of stories of hope.”

Outgoing Lieutenant-Governor Lois Mitchell has held the post for the past five years.