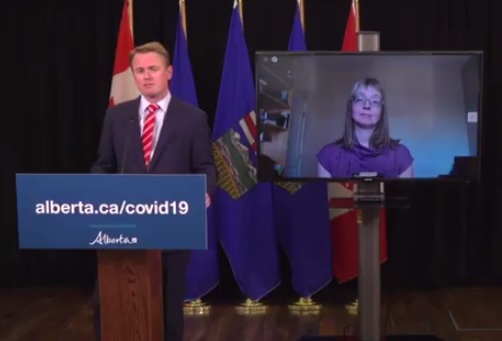 Health Minister Tyler Shandro says more than one-million people in this province have now been tested at least once.

There were also four additional deaths – one of them associated to the outbreak at Foothills Hospital in Calgary.

Here in the South Zone, there were eight new cases over the weekend including two in Lethbridge and one in the Municipal District of Taber.

There are currently six people being treated in hospital in the South Zone and two of those patients are in the ICU.

Dr. Deena Hinshaw delivered her part of Monday’s update remotely as she says she developed a sore throat over the weekend.

She’s tested negative for COVID-19 but is working from home so as not to expose anyone else.

Hinshaw is asking Albertans to do the same, adding it can be an inconvenience to stay home when experiencing mild symptoms, but it’s the new normal and the right thing to do for the safety of others.