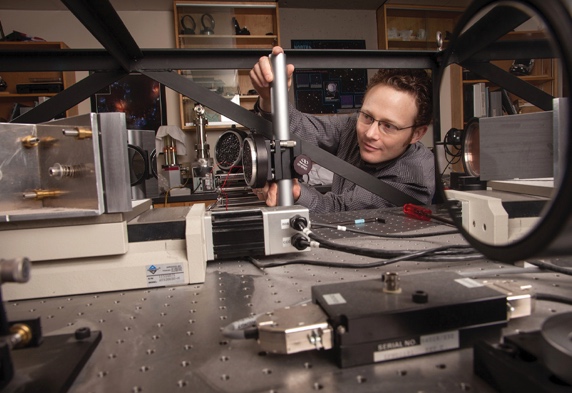 Dr. Locke Spencer, Canada Research Chair in Experimental Astrophysics with the Department of Physics and Astronomy at the University of Lethbridge. Photo credit to U of L.

LETHBRIDGE, AB – If you look up to the sky on Monday night and if conditions are clear you might be able catch a glimpse of the Christmas Star.

It’s actually what’s known as a great conjunction that will make Jupiter and Saturn appear very close together in the southwestern sky just a few hours after sunset.

On December 21st, the Winter Solstice, Jupiter and Saturn will share the same celestial longitude and appear to pass each other in the sky in what’s known as a great conjunction, because these are the two largest planets in our solar system.

Jupiter has an orbital period of approximately 12 years while Saturn’s is about 30 years.

University of Lethbridge Astronomy Professor, Dr. Locke Spencer says these types of things happen once every 20 years or so, but the last time a great conjunction like this took place — so visible and so close as this year’s event — was almost 800 years ago in March of 1226.

“Another grand feature of this upcoming great conjunction is that it is taking place on the Winter Solstice, the longest night of the year for those in the Northern Hemisphere, so, weather permitting, it should be visible to many,” says Spencer. “It should be visible in the southwest sky between Capricornus and Sagittarius, not too far above the horizon. While both are visible to the naked eye, one should be able to see Jupiter’s Galilean moons and a faint glimpse of Saturn’s rings with good binoculars.”

If cloudy skies are in the forecast on Monday evening and the days following are expected to be clear, it will allow southern Albertans a chance to see this rare celestial event for themselves.