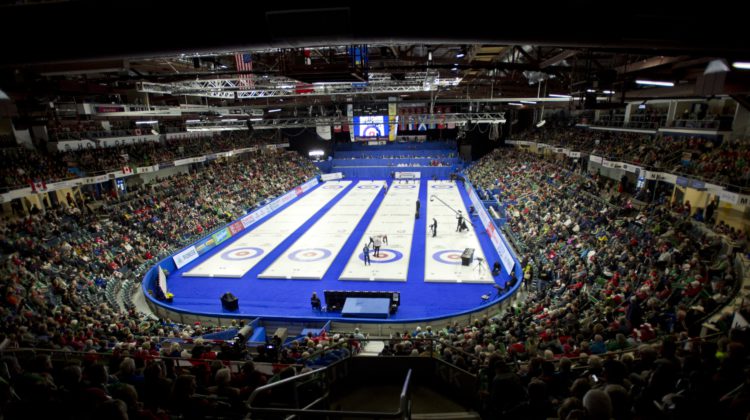 The ENMAX Centre during the final of the World Men's Curling Championship in 2019. Photo credit to City of Lethbridge.

LETHBRIDGE, AB – Lethbridge is getting set to host what is often said to be the biggest curling event.

Curling Canada on Friday (Jan 8) announced it’s awarding the city the 2022 Tim Hortons Brier which will be staged at the ENMAX Centre.

The 93rd edition of the Canadian men’s curling championship will be played March 4-13, 2022 and will make Lethbridge just the fourth city that has hosted all four major Season of Champions events — the Tim Hortons Brier, the Scotties Tournament of Hearts, the World Men’s Championship and the World Women’s Championship.

The others are Winnipeg, Brandon, Man., and Saint John, N.B.

“We’ve seen in the past what the great people in the City of Lethbridge can do when presented with the opportunity to host Season of Champions events, so to say that we’re excited to be heading back is an understatement,” said Mitch Minken, Chair of Curling Canada’s Board of Governors. “A first-class city, a first-class facility and first-class curling fans and volunteers make for a first-class championship, and this is truly something that we can all look forward to.”

Alberta has played host to the Canadian men’s curling championship on 14 previous occasions since the event’s inception in 1927, and with the 2021 Tim Hortons Brier, scheduled to be staged in Calgary as part of Curling Canada’s Hub City concept

“We have a lot of people in Lethbridge who’ve considered playing host to the Tim Hortons Brier a bucket-list opportunity, and to say there’s some excitement spreading around our city is an understatement,” said Kirk Mearns, who along with Mike Mulroy will serve as a vice-chair of the Lethbridge host committee. “It’s going to be an exciting, but busy, 14 months leading up to that opening rock, but Lethbridge is ready to get to work to make this a world-class event.”

The local host committee came before Lethbridge City Council in 2020 asking for support to host the event, saying the Brier would bring in millions of dollars in economic return for Lethbridge.

Tickets for the 2022 Tim Hortons Brier are expected to go on sale later this year.