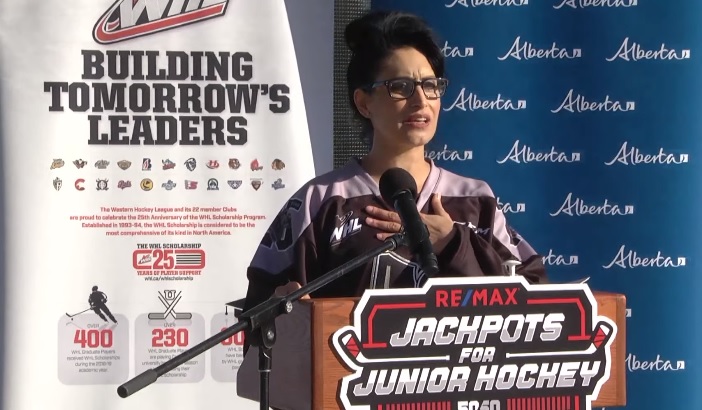 SPRUCE GROVE, AB – Junior hockey fans in Alberta have a chance to not only support their teams, but also win some money.

The UCP government announcing a new initiative Monday aimed at benefiting Alberta-based junior hockey teams in the WHL and AJHL impacted by the COVID-19 pandemic.

“Protecting the lives and livelihoods of Albertans includes ensuring that junior hockey remains a social and economic driver in our province. Thanks to changes made to provincial policy, the WHL and AJHL can now raise funds online to support their operations directly from fans in their communities. We’re asking Albertans to provide a much-needed assist and purchase Jackpots For Junior Hockey 50/50 tickets,” says Minister Aheer.

The Jackpots For Junior Hockey 50/50 will run each weekend in March.

WHL Commissioner Ron Robison says the Western Hockey League is excited for this new initiative. As largely fan-dependent leagues, the future of many of our junior hockey teams is in jeopardy in Alberta. The Jackpots for Junior Hockey 50/50 will help to ensure our junior hockey teams remain a vital part of our Alberta communities. The WHL is pleased to enter into a partnership with the Government of Alberta, the Alberta Junior Hockey League, and our longstanding WHL corporate partner RE/MAX of Western Canada to deliver this exciting new initiative to Albertans.”

As part of Jackpots For Junior Hockey, teams will be required to share a portion of proceeds received with local charities.