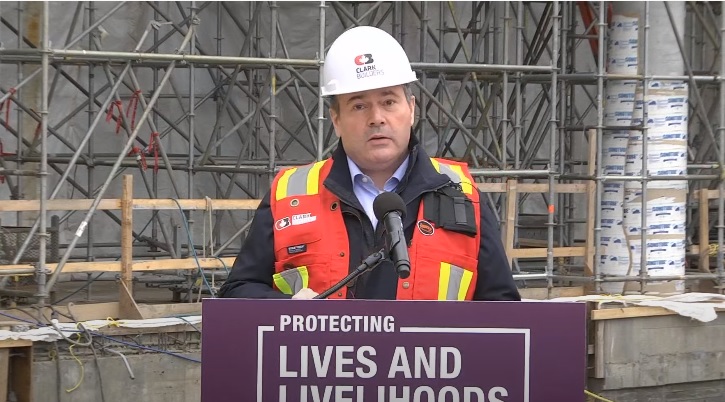 Premier Jason Kenney made the capital projects announcement on the site of the The Gene Zwozdesky Centre at Norwood. Photo credit to Government of Alberta.

EDMONTON, AB – Some major capital projects were announced Monday by the Alberta government, however full details on some of smaller builds aren’t known at this time.

The projects add up to $20.7 billion over three years, a good portion of which are in Edmonton and Calgary.

Some of those on the list include money previously earmarked for things like the expansion at Lethbridge Exhibition Park ($18.1 million) and the twinning of Highway 3 between Taber and Burdett ($85 million).

There is also a chance we could see other local capital projects announced in the days and weeks ahead as part of this same announcement.

Premier Jason Kenney says overall, 90,000 jobs will be created through these capital projects.

“As we continue to protect Albertans from COVID-19, we are focused on protecting livelihoods by planning ahead, creating jobs and preparing for recovery through our multibillion-dollar Capital Plan. These record investments are a key part of the Alberta Recovery Plan to build, diversify, and create new jobs,” said Kenney who made the announcement at a construction site in Edmonton.

There are 14 school projects as part of this capital funding announcement. Details on those will likely be coming later this week.