LETHBRIDGE, AB – Lethbridge’s lone United Conservative MLA has issued a statement regarding a letter sent out this week by a number of his colleagues.

A total of 17 UCP MLAs penned a letter, openly criticizing the premier’s decision to put stricter health measures back in place to curb a strong third wave of COVID-19 in the province.

All those restrictions are now currently in effect as of noon Friday, April 9.

Nathan Neudorf says he did not sign his name to that letter for a few reasons, one being the fact that Lethbridge’s active COVID case count is one of the highest in the province right now.

In a note posted on his Facebook page and which is copied below, Neudorf writes most of the people he hears from want some restrictions, however “they want them to be effective, consistent, and logical.”

He says what people don’t want are “pages of rules with inconsistencies and confusing restrictions.”

Neudorf says he will continue to advocate for the best outcomes for Lethbridge and work with every agency possible to help people and get them back to work safely.

This all came to light on Wednesday when a number of UCP MLAs signed their names to the open letter, saying a decision to go back to Stage 1 re-opening restrictions is wrong and moves the province backwards.

Premier Jason Kenney was asked by media about that letter on Thursday arguing those MLAs were only giving voice to those concerns about “the very real negative consequences of restrictions” and that he respects their jobs as elected representatives to articulate that.

Kenney says he listens to all views, but at the end of the day it’s the moral responsibility of the government to protect lives and the health care system using the best advice available.

You can read MLA Nathan Neudorf’s full letter below: 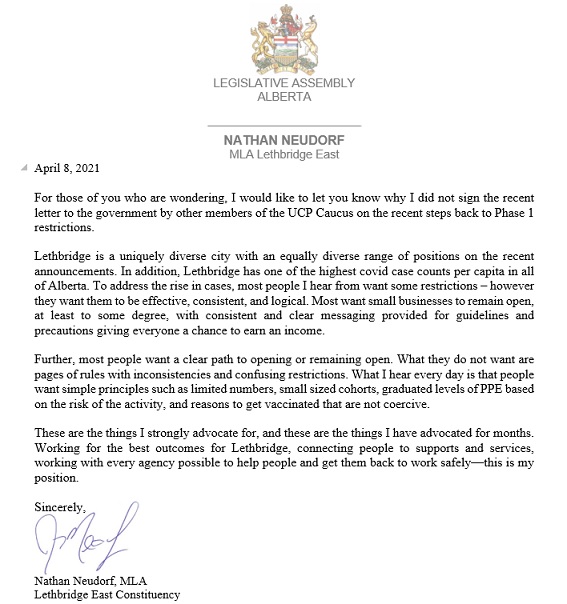 Tina Karst - October 22, 2021
LETHBRIDGE, AB - Five people are facing a variety of charges after Lethbridge Police executed a search warrant at a north side home earlier...

Tina Karst - October 21, 2021
LETHBRIDGE, AB - Local Indigenous artists are being asked to submit an Expression of Interest (EOI) to design a new installation at the Lethbridge...

Tina Karst - October 21, 2021
STANDOFF, AB - The Blood Tribe is implementing two COVID-19 vaccination policies in an effort to lower the number of active cases in the...

New book details decades of history in Lethbridge through photographs

Patrick Siedlecki - October 21, 2021
LETHBRIDGE, AB - You can now read and see the history of Lethbridge in a new book which has just been released . Lethbridge: A...
- Advertisement -

Cyclist seriously injured after being hit by vehicle in downtown Lethbridge

University of Lethbridge staying with online courses in Spring 2021