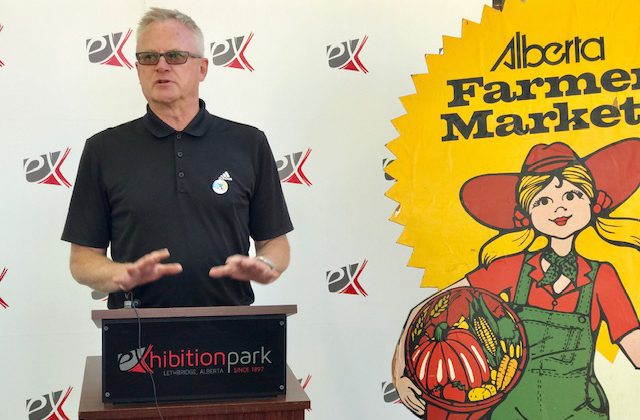 A very popular downtown event will get going again soon.

The downtown Lethbridge Farmers’ Market returns July 3rd and will be held every Wednesday until September 4th.

Mike Warkentin with Exhibition Park says this market has grown each year and has become a mainstay along Festival Square. “As downtown Lethbridge grows and as it becomes more of an urban setting, this is going to be a key piece for us to grow this event.”

The downtown market started shortly after the old downtown IGA store closed a number of years back. It’s helped fill a void during the summer months with no grocery story in the area.

As of now, there are several returning vendors this year as well as some new ones, with space still available foe few more.

Downtown BRZ Executive Director, Ted Stilson says they’re proud to have this long-standing partnership with Exhibition Park. “Besides the popular Wednesday market and other downtown events, infrastructure improvements are scheduled to start along 3rd Avenue South next year.”

He also noted the Clean and Safe Strategy along with the new Watch program are making a big difference downtown. Stilson also says Festival Square, on 6th Street South, is designed to go right down the block so there’s plenty of room for this market to keep growing.

Over 700 people attend the downtown market on average each Wednesday during the summer.