STANDOFF, AB – A company’s appeal of the denied Grassy Mountain Coal Mine won’t be getting support from the Blood Tribe.

Earlier this summer, a joint review panel recommended the proposed mine in the Crowsnest Pass not be approved after it was deemed to not be in the public interest.

Benga Mining though is appealing that decision.

In a news release, the Blood Tribe says it has reviewed that panel decision and has decided it will not participate in Benga’s appeal.

It says further to that, Kainai remains concerned about coal projects in the Crowsnest Pass region and in particular, those on the headwaters of the Oldman River watershed.

Two other southern Albert First Nations however, Piikani and Stony Nakoda, want the court to allow the appeal to go ahead. The Piikani Nation said back in June in a statement on its website that it has “continued support” for the proposed mine. 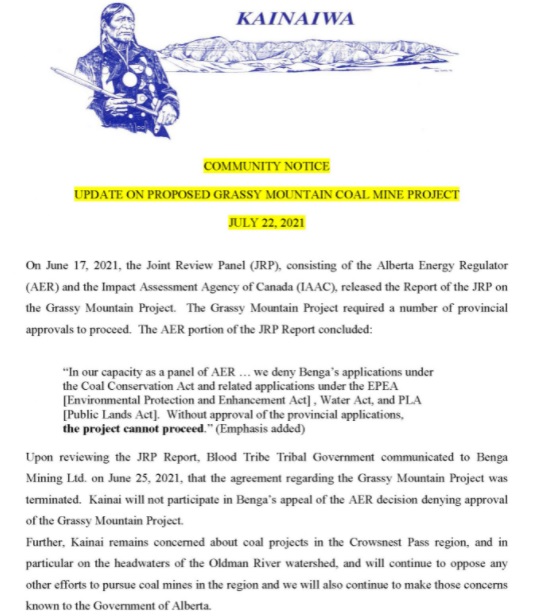 Patrick Siedlecki - September 24, 2021
TABER, AB - It appears some fraudsters are making calls in the Taber area claiming to be RCMP officers. Police are warning the public about...

Sam Borsato - September 24, 2021
LETHBRIDGE, AB - Anyone who may have witnessed a crash earlier this week between a motorcycle and an SUV at the intersection of Highway...

Mohamed Fahim - September 24, 2021
OTTAWA, ON - There’s still no word on when or even if American officials will start recognizing AstraZeneca’s vaccine or mixing doses for entry...

Patrick Siedlecki - September 24, 2021
LETHBRIDGE, AB - We found out Thursday just how dire the current COVID-19 situation is right now here in Alberta. The number of people in...
- Advertisement -