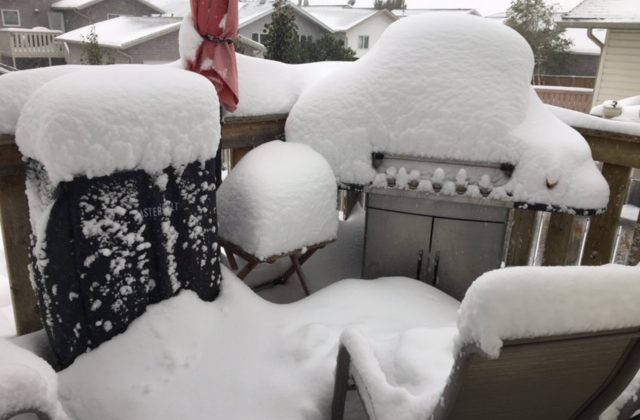 Massive amount of snow as of Sunday morning in Lethbridge. Photo credit to Candis Harper on Twitter @charper5

It has been an early fall snow storm for the record books.

Southern Alberta has been blasted by a long-lasting, late September dump of snow and it has been an epic weather event to say the least.

As of 9:30 am Sunday (Sept. 29), close to 80 cm of snow had been recorded at the Waterton Park Gate and there is a lot more of the white stuff in the forecast to come. Environment Canada’s 4:00 pm Sunday forecast update calls for another 15-20 cm for Lethbridge and southwest Alberta overnight into Monday. The previous September record for southwest Alberta was 61 cm total in the Beaver Mines area 1947. That record was blown away in a matter of just 30 hours and the snow continues to come down.

This is all the result of a very moist and strong low pressure system coupled with an arctic high which not only has brought a lot of precipitation, but cold temperatures. The northeast winds are causing what’s referred to as “upsloping”.

The storm has caused a number of power outages across southern Alberta. A good swath of north Lethbridge was without power for several hours overnight Saturday into Sunday because of the storm.

Those totals will no question balloon as the snow keeps falling. One measurement on the west side Sunday afternoon came in at 55 cm.

Environment Canada said some areas in the southwest would more than likely surpass 100 cm of snow before the storm tapers off Monday afternoon. 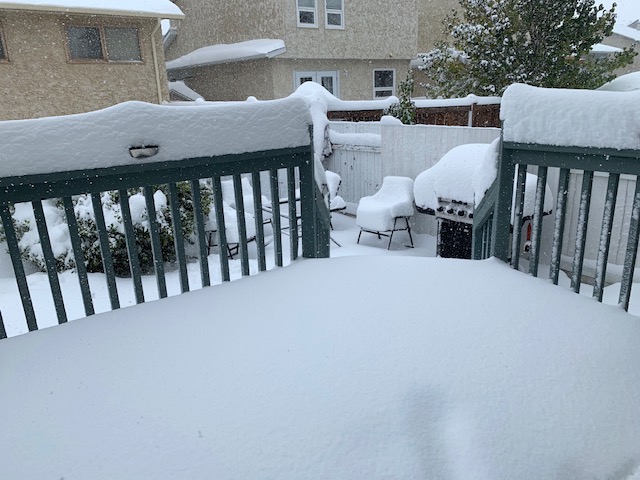 Making matters worse has been those gusty northeast winds, causing white out conditions and drifting all across southern Alberta and southern Saskatchewan. The storm has also been hammering a good portion of Montana with record snowfall.

People have been advised to stay off all areas highways for non-essential travel. There have been crashes reported across southern Alberta due to the weather.

Forecasters had been anticipating this snow storm to be “historic”, especially for this time of year.