Federal officials released Canada’s projections for the extent of the spread of COVID-19 and what to expect in the coming weeks and months.

The projections say Canada will see 500 to 700 total deaths related to COVID-19 by April 16th. That takes into account the number of total cases doubling every three to five days, which Dr. Howard Njoo, the Deputy Chief Public Health Officer, says is a positive trajectory compared to other countries. 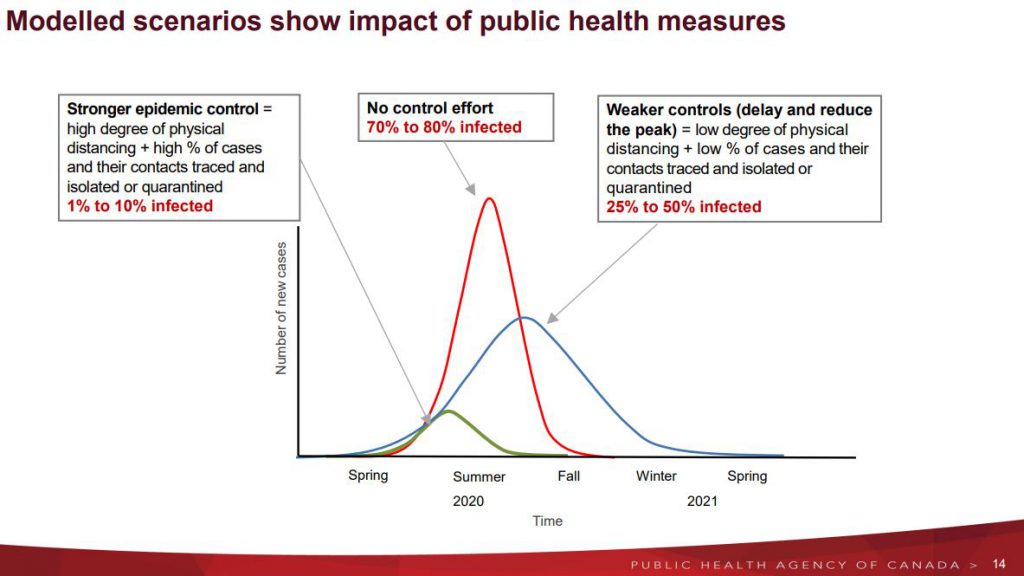 At least 198 out of the total 401 reported deaths have occurred among residents of long-term care homes in the country. Nevertheless, Dr. Tam says these numbers do not paint a complete picture, mainly because we know that lab-confirmed deaths are not the only ones attributed to the virus.

The projections further indicate if stronger to moderate controls are in place, about 11,000 to 300,000 deaths are to be expected over the whole duration of the pandemic. This takes into account between 2.5% and 5% of the population getting the virus, amounting to about a total of 934,000 to 1,879,000 Canadians getting the virus over the next months.

Dr. Tam and Dr. Njoo explained how Canada is in the early stages of its COVID-19 outbreak, explaining what the federal government is aiming to do, is reduce the impact as much as possible by pushing the country’s curve of the rate of spread down. Dr. Tam stated if each person with COVID-19 infects less than one person on average, the epidemic dies out.

Dr. Tam says these projections are based on provincial projections released over the past weeks. She explains while the numbers released Thursday may look stark, what we do together now to reduce the impact of COVID-19, will buy us more time to better understand the virus and to develop treatments and vaccines.