Wildfires in northern Alberta continue to grow due to hot, dry, windy conditions 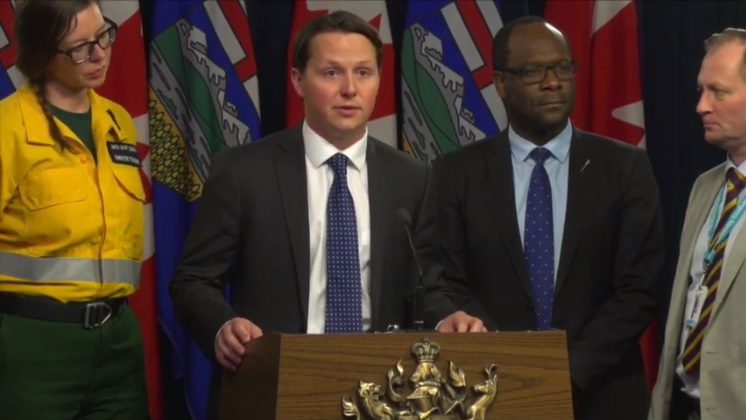 Agriculture and Forestry Minister Tyler Dreeshen provides an update on northern Alberta wildfires. Photo courtesy of Government of Alberta live stream.
A difficult day for firefighters in northern Alberta as nine out-of-control wildfires continued to move quickly due to hot, dry and windy conditions.
Officials say the largest fire, the Chuckegg Creek wildfire near High Level, has now grown to 230,000 hectares with several other fires growing as well.
Agriculture and Forestry Minister, Tyler Dreeshen, says the weather won’t be offering much help in the coming days. He says Albertans should expect similar conditions for at least the next two weeks.
Dreeshen says smoke has been a major challenge in fighting the fires as the loss of visibility makes it difficult to use air supports.
There are currently 28 active wildfires in Alberta. Smoke from those fires has pushed south, blanketing much of southern Alberta as well.
For updates visit the Alberta Emergency Alert website.