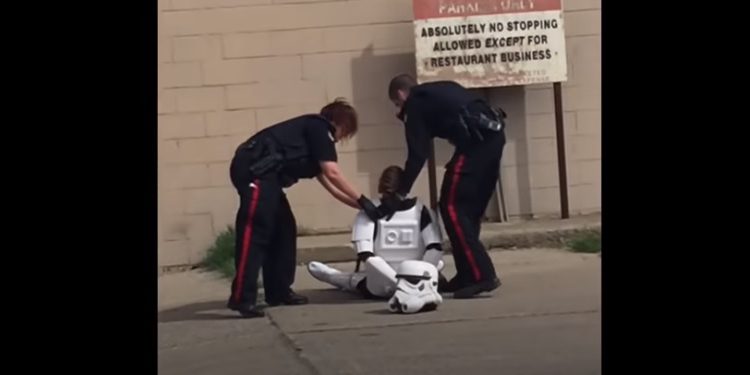 A woman in a Storm Trooper costume sits in handcuffs outside a Lethbridge theme restaurant after police responded to 911 calls about a person in costume carrying a firearm. Photo via YouTube (Deiby Corleoni)

The Alberta Serious Incident Response Team (ASIRT) will be reviewing an external investigation, once complete, of a police incident in Lethbridge that’s grabbed headlines around the world.

On Monday, May 4, a woman suffered a minor injury when she was put into handcuffs in a parking lot while trying to promote a north side business on what is commonly known as Star Wars Day.

The woman was wearing a Stormtrooper costume and carrying a toy gun. Lethbridge Police were responding to a pair of 911 calls regarding someone in a costume holding a firearm.

Initially, Lethbridge Police Chief Scott Woods directed a service investigation under the Alberta Police Act, which would look into whether the responding officers acted appropriately within the scope of their training and LPS policies and procedures.

Woods then contacted the Medicine Hat Police Service (MHPS) which agreed to conduct their own independent investigation of the incident.

Now, the LPS says, in a press release, the matter has been deemed by the Director of Law Enforcement to meet the criteria of Section 46.1 of the Police Act which relates to serious and sensitive matters.

After the external investigation by the MHPS has been completed, it will be reviewed by ASIRT to ensure the investigation was conducted impartially, thoroughly, and without bias.

ASIRT is an independent provincial agency that investigates incidents where serious injury or death may have been caused by police, as well as serious or sensitive allegations of police misconduct.

The assessment of whether there are reasonable grounds to believe an officer has committed a criminal offence is not within the scope of an ASIRT review as the agency is only reviewing the quality of the external investigation, not the incident itself.