LETHBRIDGE, AB – A majority of Canadians continue to believe in God, according to the most recent national survey by a University of Lethbridge sociologist.

Dr. Reginald Bibby has been charting the God numbers through national surveys from the mid-1970s to right now in fact.

He says God is not faring all that badly in the polls.

“This religious polarization includes individuals who can be described as pro-religious, low religious and no religious,” Dr. Reg Bibby

Bibby notes some 60% of Canadians continue to believe in a higher power with only 15% saying they definitely don’t.

Over the years, these surveys have provided interesting insights about Canadians’ spiritual beliefs.

Belief in God is slightly higher in Saskatchewan and the Atlantic regions. Levels of belief are slightly lower among younger adults and university graduates.

As would be expected, belief in God is considerably higher among the 75% of Canadians who identify with religious groups than it is among the 25% who say they have no religion.

Bibby says the God findings provide a further reminder of the reality of the growing diverse responses to religion in Canada.

His latest latest survey finds that 25% of Canadians are pro-religious, 45% are low religious and about 30% has no religion at all.

“During this time of year when faith has traditionally been on the minds of many, more Canadians than in the past have said goodbye to the gods. But large numbers — in fact the majority — have not,” says Bibby.

Bibby has been monitoring social trends in Canada for the past 45 years and making his findings publicly available. One of his most recent religion books is Resilient Gods: Being Pro-Religious, Low Religious, or No Religious in Canada. 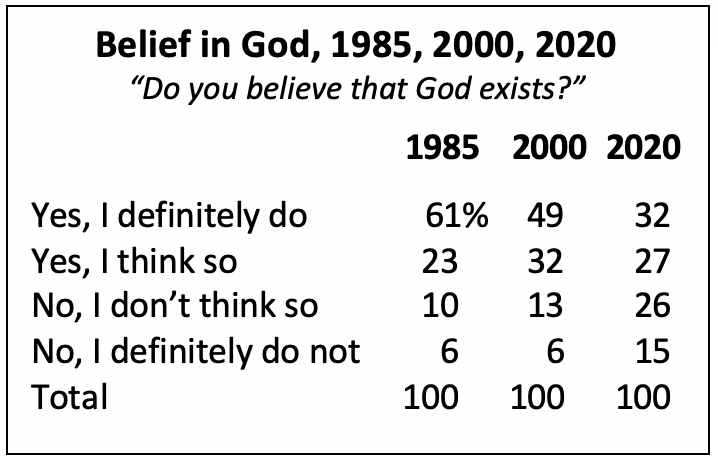 (With files from U of L)

Patrick Siedlecki - August 1, 2021
LETHBRIDGE, AB - July was one for the weather record books across southern Alberta and the last day of the month was a doozy...