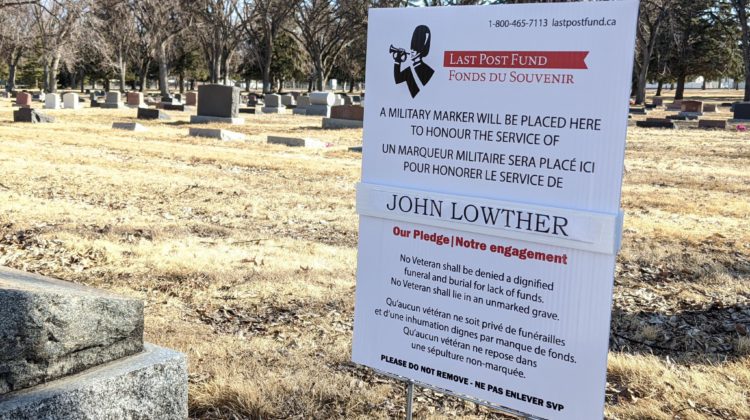 LETHBRIDGE, AB – Unmarked graves across southern Alberta, recently found to contain the remains of local veterans, are now getting proper gravestones as an important act of remembrance.

Yvonne Sugimoto, a volunteer researcher with the Alberta Branch of the Last Post Fund, discovered nine unmarked graves in Lethbridge, two in Taber, one in Raymond, five in Fort Macleod and several in Calgary.

Temporary markers are being put up to recognize some of these graves until headstones can be permanently installed.

Glenn Miller with the Last Post Fund says each grave will eventually have with military-style markers.

“As a veteran myself, I’ve always been guided by three words, Lest We Forget,” stated Miler. “In many cases it has been forgotten for whatever reason. So this is a small step to fix that, honour that, and preserve it moving forward.”

Miller says it’s important to thank all these veterans in a visible and permanent way.

The Last Post Fund launched the Lost Veterans Initiative to recruit researchers across Canada who can further help to find veterans who lie in unmarked graves. Since launching of the program this past winter, several volunteer researchers, including Sugimoto, have come forward. Like Miller, Sugimoto says it’s important these vets be honoured.

“So many of them died alone. Many of them had PTSD (post traumatic stress disorder) and if you’re dying in a foreign country and you’re ill and have no one who cares about you, it’s important that somebody recognizes what you did for your country,” said Sigamoto.

You can find out more about Lost Veterans Initiative here: Last Post Fund