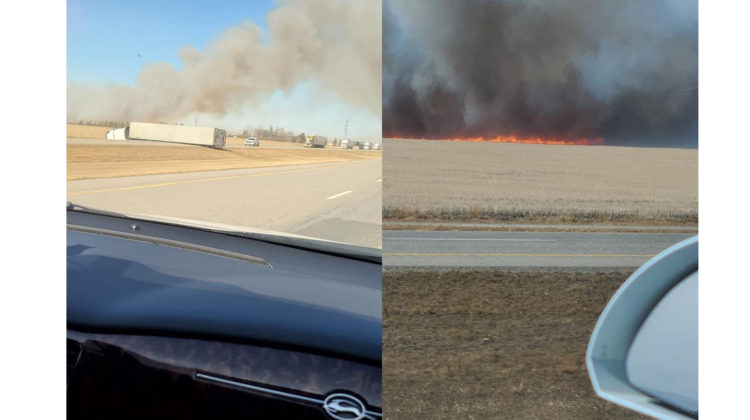 Wind warnings and even snow squall watches are currently in effect. Environment Canada says a cold front is bringing pockets of intense snowfall and strong winds, gusting between 100 and 140 km/h, to the region.

There were reports earlier on Sunday (Mar. 28) that a least one semi truck had flipped on Highway 2 in that area. That has since been cleaned up and Highway 2 has re-opened, but you’re still asked to avoid the area until conditions improve.

Residents in the MD of Willow Creek were told to prepare for evacuation  around 3:15 p.m.. A reception centre for evacuees has been setup at the Claresholm Community Centre, 5820 8 Street W.

Highways 520 and 23 have re-opened, as well, but travellers are urged to be cautious since visibility may still be poor in some spots due to smoke and blowing dust.

Blood Reserve officials confirmed around 4:40 p.m. that a grass fire had closed a significant portion of Highway 509. That highway has since re-opened, but Blood Tribe Police are advising travellers to be careful on the approach to the lease road turn.

Blood Tribe Fire Chief, Jacen Abrey, says the fire “ran approximately 28 kilometres west to east and six kilometres south to north.” The fire is contained, but crews will remain on scene over the next 18 to 24 hours to monitor hot spots. An investigation in to the cause of the blaze is underway.

About 15 homes in the Fort Whoop Up area, located on the east end of the Blood Reserve, were evacuated. An emergency shelter has been setup for them at the Multi-Purpose Building in Standoff.

The Willow Creek Fire Department saying around 6:30 p.m. that the wildfire that started in the Claresholm area had been contained. Assessments are underway regarding when residents will be allowed to return home and what damage has been caused.

UPDATE (4:10 p.m.): A reception centre for evacuees within the MD of Willow Creek has been setup at the Claresholm Community Centre, 5820 8 Street W.

Lethbridge 911 says emergency crews are now dealing with multiple fires, including a residential fire in the city and another northwest of St Mary’s reservoir.

UPDATE (4:20 p.m.): The Town of Claresholm says Highway 2 south of the town is now open, but Hwy 520 to the east remains closed. You’re still asked to avoid the area until conditions improve. 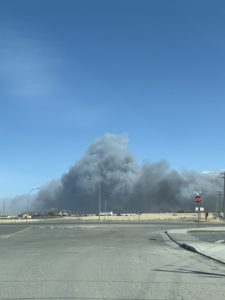 Photo credit to the Town of Claresholm.

UPDATE (4:40 p.m.): Blood Reserve officials confirm that a grass fire has closed a significant portion of Highway 509. Fire and ambulance crews are on scene, along with heavy equipment operators. The public is urged to stay away from the area.

Residents in the Fort Whoop Up area, located on the east end of the Blood Reserve, have been evacuated. An emergency shelter has been setup at the Multi-Purpose Building in Standoff.

UPDATE (5:00 p.m.): Fortis Alberta says power outages are affecting about 494 customers in the MD of Willow Creek, and another 13 just outside Coaldale. Power is estimated to be restored in those areas around 7:00 p.m..

UPDATE (5:20 p.m.): All residents south of the Village of Champion are now being evacuated due to the grass fire that’s also threatening Carmangay. The Village of Barons says its Community Hall is open for evacuees from Carmangay and Champion.

UPDATE (5:55 p.m.): The City of Lethbridge says emergency crews are monitoring several wild fires in the surrounding area, but these fires do not pose a risk to city residents at this time.

In addition, a fire destroyed a home on Trent Road West earlier Sunday afternoon (Mar. 28), with the City saying “heavy winds made the operation challenging, but crews were able to prevent the spread to any adjacent property.” Damage is estimated at $300,000 and an investigation into the cause of the blaze is underway.

UPDATE (6:05 p.m.): Highway 509 is now open. Blood Tribe Police advise all travellers to be careful on the approach to the lease road turn.

UPDATE (6:30 p.m.): Fortis Alberta is reporting power outages for about 600 customers in the Fort Macleod area. About 85% should be restored shortly.

For residents in the Stavely area, Altalink is reporting a number of downed poles. Power will be out for there for quite a while.

UPDATE (6:40 p.m.): Highway 520, west of Highway 23 to Highway 2, has sustained fire damage and will be closed until further notice. You’re asked to use an alternate route. Visibility is also limited on roads due to dust and smoke.

The Willow Creek Fire Department says the wildfire that started in the Claresholm area has been contained. Assessments are underway regarding when residents will be allowed to return home and what damage has been caused.

UPDATE (7:00 p.m.): Highway 23 from Nobleford to north of Champion has reopened as the wildfire there has been contained. Residents of Carmangay are now able to return home, as well.

All emergency alerts have ended and all fires are contained.