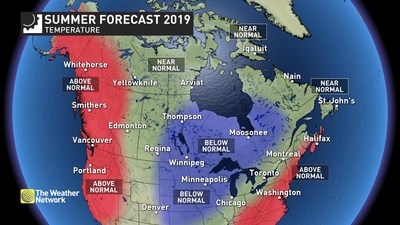 Alberta can expect an up and down kind of summer if The Weather Network’s outlook for June, July and August holds true.

However, the biggest concern this summer for us here in the south is not expected to be drought or extremely hot weather, it’s smoke from potential forest fires to the west.

Meteorologist Doug Gillam tells our radio station conditions in neighbouring B.C. are expected to be tinder dry and hot. “You hope that we don’t have a repeat of last year. Our summer forecast highlights the threat for similar conditions (as last year). Hopefully we will have more favourable conditions and not as many fires as last year.”

During the summer of 2018, southern Alberta was flooded at time with thick smoke from forest fires the west, prompting several days of air quality advisories.

Gilliam notes there is a heightened risk for extended periods of hot and dry weather across the border in British Columbia and that typically means an increased threat for wildfires and smoky conditions here.

Gilliam says southern Alberta should see a fairly decent summer overall, however just not as hot as it’s been the last few years. He notes Alberta will likely be in a transition zone with hot air to the west and cooler air across the eastern prairies. He expects that to bring this area more average rainfall and slightly warmer than normal temperatures.