$11.2 million in PrairiesCan funding at the unveiling of the new Lethbridge location 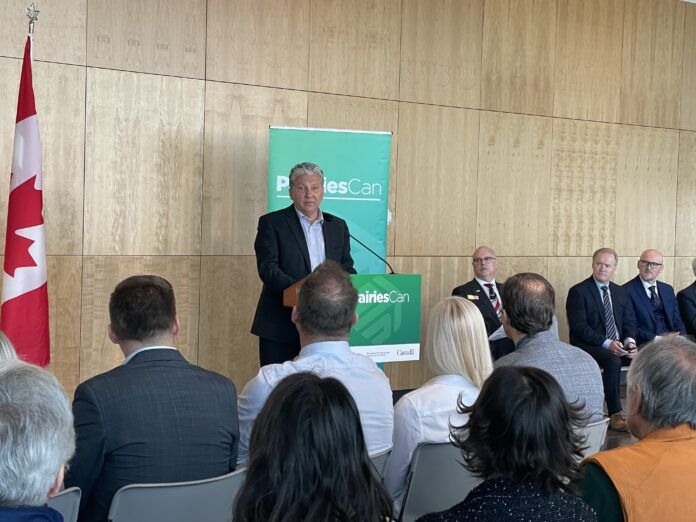 The federal government announced $11.2 million in funding for 18 projects in the Lethbridge region.

Minister Dan Vandal made the announcement Thursday morning at the unveiling of the new PrairiesCan Service location in the city. The funding will support projects focused on tourism, community economic development and innovation in the region. Vandal says the funding will help 15 different organizations create and support 230 jobs.

“It has been in the cards probably for the last year, we have regular intakes. Organizations make applications for the different funding envelopes that we do have and those applications are analyzed by public officials,” Vandal says. “They are then recommended for approval to the minister’s office. We do a second review and then usually we approve the recommendation.”

Some of the organizations receiving funding from the $11.2 million include the University of Lethbridge and Lethbridge College, the Alberta Sugar Beet Growers, the Lethbridge and District Exhibition, and the Galt Museum.

Alberta MLA for Cardston, Taber, Warner Grant Hunter was also at the announcement, and says not only partnering but working with the federal government when it comes to what is happening with agriculture is critical. He adds it is also important for rural and agricultural communities in the province to be “vibrant,” and places residents will enjoy. This is something the towns of Taber, Coalhurst, Picture Butte and Coaldale will work to upgrade in their communities with the portion of the funding they each received. Hunter adds in Coaldale the Birds of Prey Foundation also received funding to help build an environmental learning facility.

“What an amazing venue, you go there and you hold onto an eagle and you’ve lived for the first time. Hunter says it is pretty exciting – it is one of the gems we have done here in southern Alberta,” Hunter says.

Along with announcing the millions in funding, the PrairieCan also unveiled its new service location in Lethbridge. The new office will be in the Historic Post Office downtown. Minister Vandal says while there is still work to be done he expects it will be open before he returns to the city in the summer.