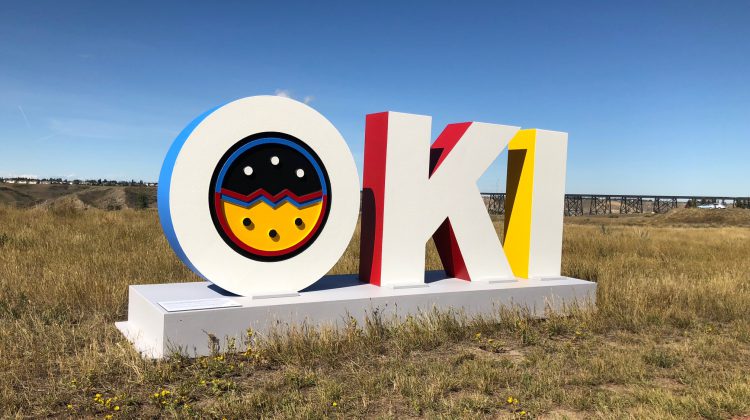 The "Oki" project unveiled in Lethbridge on Thursday as part of a new downtown community project. Photo credit to MyLethbridgeNow.com (Tina Karst)

A new community project will be touring downtown Lethbridge in celebration of Indigenous Language and Reconciliation Week.

The large, three-dimensional word, Oki, which is a traditional Blackfoot greeting, was unveiled at the Galt Museum and Archives Thursday.

The project is a collaboration between the Reconciliation Lethbridge Advisory Committee and Heart of Our City Committee.

The City’s Urban Revitalization Manager, Andrew Malcolm, says it was designed and manufactured in Lethbridge and is made to be mobile and moved around to different events and celebrations.

He says it’s a small, low-cost project that’s intended to improve the public realm, intended to be in a public space for people to come and take pictures with, brighten an area up and also start conversations.

HOOC Committee Member and Blackfoot Knowledge Keeper, Jordan Head, says there was a time when Indigenous people weren’t allowed to leave reserves so a lot has changed since then.

He adds, “the Heart of Our City Committee hopes to celebrate and bring greater awareness to the fact that Downtown, like the rest of Lethbridge, is located on traditional Blackfoot territory” and “we want to continue demonstrating that the Downtown is an open and welcoming environment for a diversity of uses, users, and cultures.”

The Oki project also coincides with the United Nations year of Indigenous Language.

It will be at the Galt until Friday then it will move to City Hall for Monday morning when the Reconciliation Week flag will be raised.