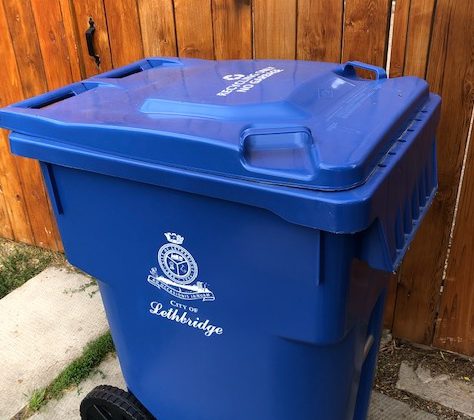 The City’s Waste and Recycling Manager is reminding residents about what can and can’t be included in curbside pick-up.

Joel Sanchez was the guest speaker at the most recent Southern Alberta Council on Public Affairs luncheon.

He says it’s great people are utilizing the service, but not everything that’s recyclable can go into the blue carts.

“For example helium tanks. Even though they have a recycle symbol on the tanks, that doesn’t mean they can go through the process,” says Sanchez. “They still have compressed gas and that poses a risk to the driver (of the recycle truck) and a risk for the person at the Materials Recovery Facility. There is another option though. There’s an area where these types of things can be brought to at the Waste and Recycling Centre.”

Sanchez says residents must remember there is a person behind the line doing the sorting and hazardous materials placed in blue bins can be a safety concern for those workers.

He also notes over the next few months, the City will continue the recycling education campaign for residents.  Sanchez says overall, he’s pretty satisfied with the results of the blue bin program to date. “We’ve been able to achieve the targets we were looking for. We know we still have a little bit of improvement to do.”

Sanchez was asked about the next step to the curbside program which would be organics. He says a recent online survey just finished and it will take a few weeks get those results, however they’ve been working on a green cart implementation plan for a while.

He notes once that is presented to City Council, it’ll be up to them as to when that next phase would go ahead.