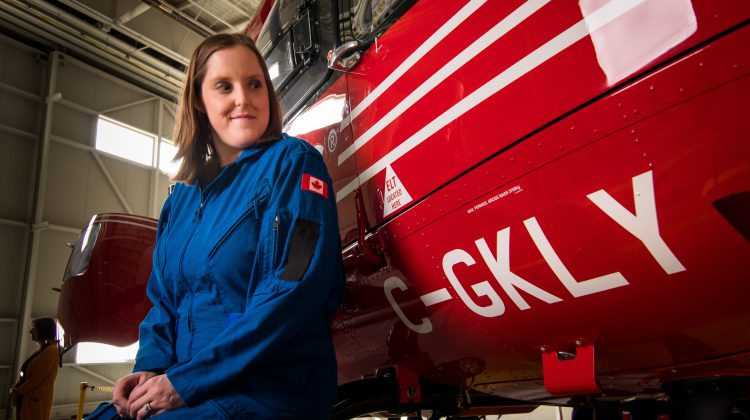 VIP Kelly Waldron poses for a photo next to the C-GKLY call letters that were assigned in her honour. Photo shot on Thursday, April 18, 2019 during a public unveiling event for the first two Airbus H145 helicopters to join STARS' fleet. Photo by Lyle Aspinal

A Lethbridge resident has received a very special honour from STARS.

When the first of the air ambulance’s new fleet of helicopters arrived in Calgary a few months ago, Kelly Waldron was on board as a VIP (Very Important Patient).

The new chopper she was in honours her place in STARS history by bearing the registration mark C-GKLY, which is a nod to her first name.

Waldron was STARS first-ever patient. She and her twin brother were born two months early in Lethbridge back on December 1st, 1985 and Kelly had to be airlifted to Calgary by STARS. Her brother Travis was flown to Calgary in a fixed-wing plane.

“My mother was told her children would likely not survive and to say her goodbyes,” said Kelly.

Instead, the infants thrived and so did STARS.

Both Kelly and STARS will turn 34 years old this December. The organization says as it replaces its old helicopters, the past won’t be forgotten.