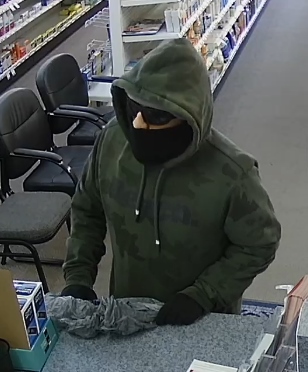 Video photo of the suspect at Norbridge Pharmacy. Credit to Lethbridge Police.

Lethbridge Police are looking for a suspect after a masked man tried to rob a north side pharmacy Thursday morning (Nov. 14).

Officers were called to Norbridge Pharmacy at about 10:00 am.

The man walked into the business and demanded narcotics staff refused and he took off.

At about 2:00 Thursday afternoon, a masked man, matching the description from the Norbridge incident, entered the Prescription Centre West Pharmacy on Jerry Potts Boulevard.

As he approached the counter staff told him to leave and he did.

The suspect in both cases is said to be a caucasian man, 25 to 30 years old, five-foot-six to five-foot-eight.