Stats Canada says this city is proportionally, one of the youngest in the country.

Data indicates as of two years ago, Lethbridge ranked 4th in Canada for having the largest proportion of residents between the ages of 20 and 24.

Trevor Lewington with Economic Development Lethbridge says this community is the only Alberta city in the top ten. “In terms of an available workforce and skilled workforce, Lethbridge is very fortunate to have a high number of young folks. I think the key for policy makers and decision makers is how do we create opportunities to keep those people here as they grow in their careers.”

The last city-wide census conducted in Lethbridge in 2019 indicated the overall average age of all Lethbridge residents is roughly 38 years old.

A report from the CBC stated Calgary and Edmonton are no longer part of the top ten as it was when this first report was done back in 2008. Lethbridge was number two, actually on that original list. 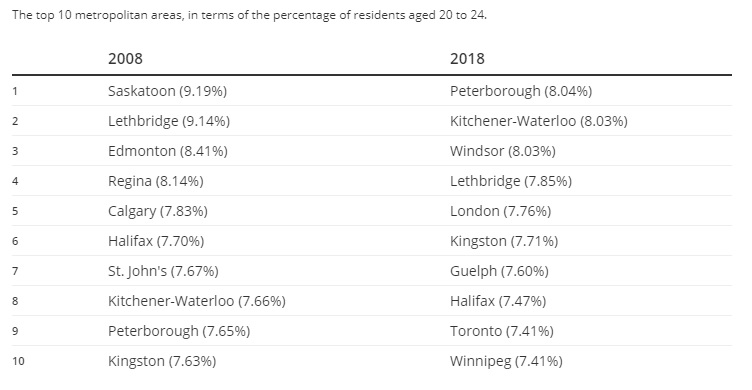 According to the latest data, out of Lethbridge’s total population, 7.85% of residents are between the ages of 20 and 24.

Lewington says our two post-secondary schools have a lot to do with that too, noting we are essentially a college town, which definitely contributes. He notes Lethbridge is also a city which has a lot of young families.

He says with smaller cities like Lethbridge and Peterborough, Ontario on the list, perhaps it indicates this next generation is looking for a different lifestyle and different opportunities than just living “in the big city”.

(With files from the CBC)