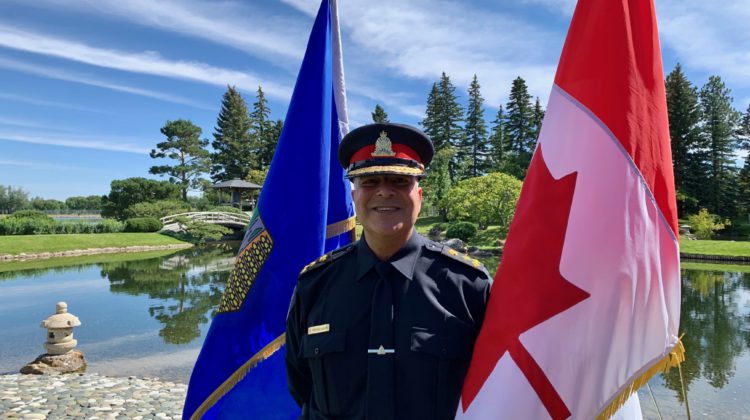 Longtime RCMP member, Shahin Mehdizadeh was sworn in as the city’s the the 19th Chief of Police during a special Change of Command ceremony held Monday afternoon (Aug. 31) at Nikka Yuko Japanese Garden.

The ceremony, the first of its kind held formally in Lethbridge, saw interim Chief Scott Woods hand over the LPS flag to Mehdizadeh as formal show of change of command.

Mehdizadeh formally replaces Rob Davis who left the LPS last year around this same time to head back to Ontario.

“It’s a privilege for me to assume command of this great organization and I want to thank the Lethbridge Police Commission and City Council for supporting me and putting their trust in me to do this job,” said Chief Mehdizadeh. “The Police Service plays a key role in public safety but building and maintaining safer communities is a partnership. I am a strong believer in working with community stakeholders and partners to promote safety and develop sustainable solutions that can make this community better.”

Mehdizadeh added he is committed to ensuring the LPS is a vibrant and accountable force with a healthy team that is strong, resilient and happy to come to work every day and give their absolute best to the community.

During the event, a blanket ceremony was performed by Blackfoot Elders who adopted Chief Mehdizadeh into the Blackfoot community and bestowed upon him the Blackfoot name “Wolf Butte”. He says that was a huge honour.

Mehdizadeh began his policing career with the RCMP in 1989. He bring more than 30 years’ of national and international policing experience to his new role with the Lethbridge Police Service. Mehdizadeh has lived and served in four provinces and worked projects in every province throughout Canada in policing disciplines including general patrol duties, major crimes, drugs and organized crime, covert operations and national security.

“I’m not a guy to come in and change things,” says the new Chief. “I’m someone who likes to look at what we are doing and how we can do it better. I would like to ask all employees (of the LPS) to look at where we can find efficiencies and opportunities to service the community better.”

Mehdizadeh says he wants to make sure the LPS is more efficient, more productive, and as the service goes on it continues to progress in the policing world of 2020.