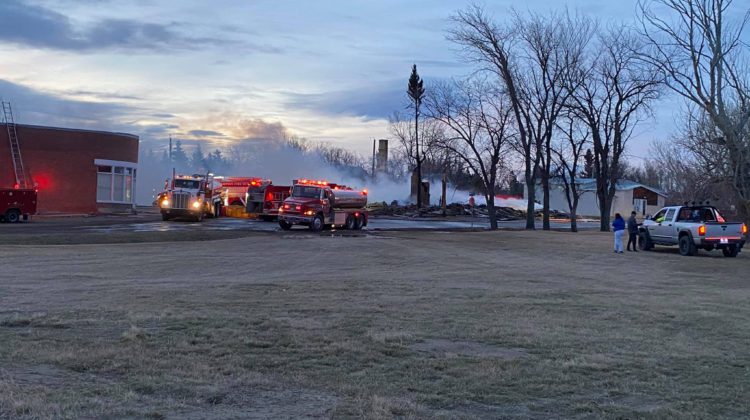 CARMANGAY, AB – The historic Grange Hotel in Carmangay has burned down.

According to a post on the Carmangay Historial Society Facebook page, a fire began at about 2am on Sunday, March 28 and by daylight it had been destroyed.

Several fire crews from in and around Vulcan County responded including Carmangay, Champion, Vulcan, Barons, Picture Butte and Willow Creek.

Regional Fire Chief for Vulcan County, Doug Headrick tells our radio station the hotel is a complete loss but firefighters were able to save the restaurant and library as well as buildings north of the hotel, despite very windy conditions overnight.

There were no injuries. Crews remained on scene as of 9am Sunday extinguishing hot spots. Headrick says it’s too early to determine the cause of the blaze but an investigation will take place in due course.

The Grange Hotel opened in late 1909 by Peter McNaughton. It was also the famous destination of what’s been dubbed as “the world’s shortest St. Patrick’s Day parade” which began some 30 years ago. The annual parade would begin at the Village Office and end across the street, about a half a block away, at the Grange Hotel.

Grange Hotel. Photo courtesy of the Village of Carmangay.