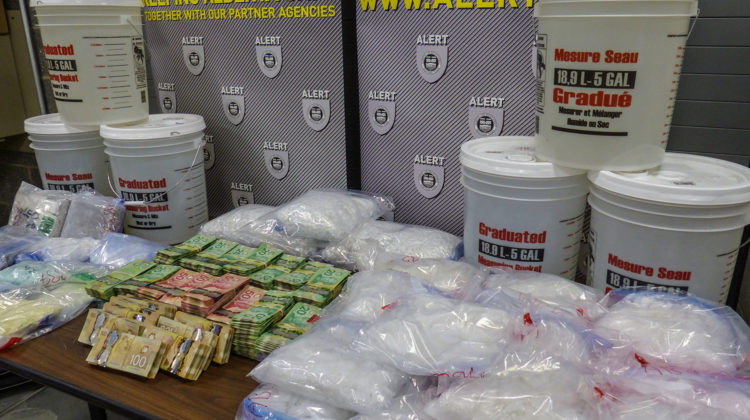 CALGARY, AB – A massive haul of drugs after police busted a trafficking operation in Calgary.

The Alberta Law Enforcement Response Team (ALERT) found nearly $3 million in illegal narcotics in what’s believed to be the province’s largest seizure of GHB to date.

GHB is colourless and odourless and is commonly referred to as the “date rape drug”.

ALERT Calgary seized 113 litres of GHB along with a large quantity of meth, fentanyl, and cocaine as well as over $300,00 in cash.

“The totality of what was seized is staggering, and represents a high degree of community harm. Behind so many doses are crimes committed to feed that addiction; be it property crimes, thefts, frauds, and robberies, and all feeding into social disorder,” said Supt. Dwayne Lakusta, ALERT CEO.

Three Calgary men are facing a total of 14 drug-related charges.

ALERT began its investigation just a month prior after receiving information about suspected drug trafficking activity in the Calgary region.