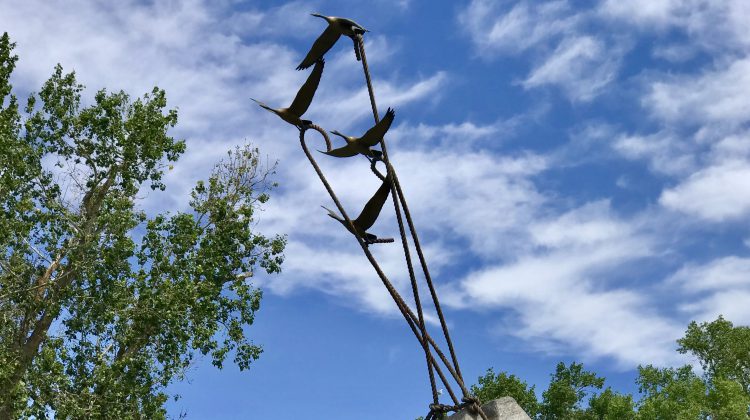 The public art gift from Saint-Laurent, QC is visible as you drive along Mayor Magrath Drive. Photo credit to My Lethbridge Now.com (P:at Siedlecki)

A delegation from Lethbridge’s twin city in Saint-Laurent, Quebec was in town to officially dedicate a public art piece.

“Migratory Gift” was given to the city, from Saint-Laurent, to recognize the long-standing twinning relationship between the two communities. The art gift has been visible on the far west end of Henderson Lake Park for a few months now, but was officially commissioned on Monday.

City Councillor Ryan Parker says the art piece has a lot of significance. “The geese represent the struggles of keeping twinning and friendships together. The rope symbolizes the tethering of friendships and the four corners of the world represent where the geese would go throughout the year, but they would all come back to one meeting place, and that’s the stone.”

Lethbridge has also gifted a public art piece to Saint-Laurent. That will be commissioned later this fall. It features coyotes on the prairies.

Saint-Laurent Mayor, Alan DeSousa says it’s all part of this exchange. “Lethbridge contributed a work of art that will be installed in our city later this fall. We are looking forward to inaugurating that. These are gifts we decided to give to each other as part of the 50th anniversary (of the twinning relationship) two years ago.”

Lethbridge and Saint-Laurent have the longest ongoing twinning relationship in the country.

DeSousa says it’s important for kids from Quebec to come here to learn about life in western Canada and southern Alberta. As part of the exchange, some kids between the ages of 14 and 16 will go to Saint-Laurent in a few weeks to experience their culture and way of life in Quebec.