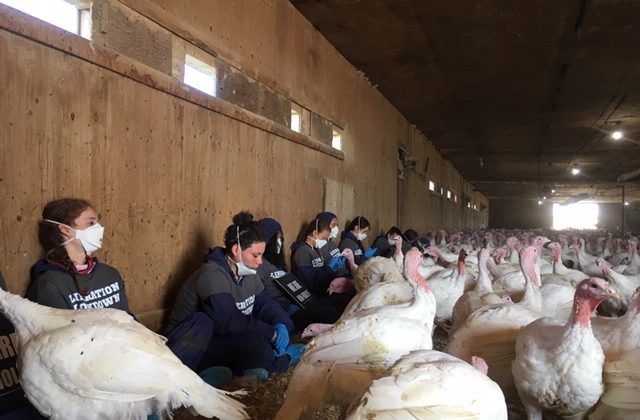 File Photo. Protesters sitting alongside a wall inside a turkey barn in southern Alberta Monday. Photo credit to Trev Miller

Activists from four provinces hunkered down, illegally inside a barn full of animals near Fort Macleod Monday (Sept. 2) to expose what they say are injustices on some factory farms.

The group claims it has videos of animals considered unprofitable, taken out of the barn on a Hutterite Colony and put into a wood stove and burned alive.

The protesters don’t identify with being part of any particular group. They allege industries like the Jumbo Valley Turkey Farm treat individual animals disrespectfully to make a profit.

The operators of the farm however, disagree. RCMP were called to help keep the peace, however it’s not known if any charges will be laid. The farmer allowed protesters to tour the barn with police, saying he had nothing to hide, despite the group’s allegations.

Close to 100 people wearing masks and gloves took part in the protest, which they said was peaceful.

Trev Miller, an organizer in the animal rights movement says currently animals are considered legal property – with alternatives exploding in availability and the ongoing destruction of the Amazon rainforest to supply global meat demand, “there’s every reason for compassion towards animals.”