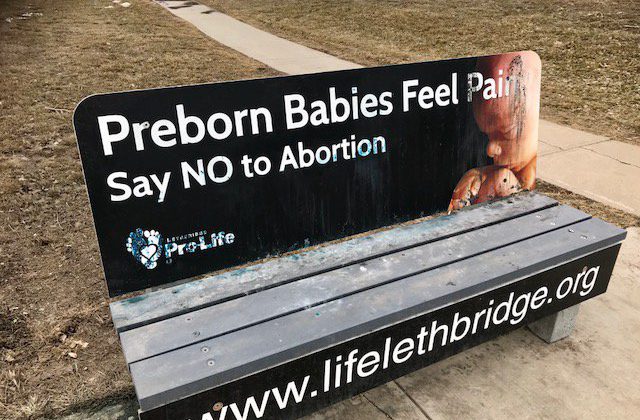 A lawyer on behalf of the Lethbridge And District Pro-Life Association (LPL) laying out four main arguments in front of a judge on Thursday (Oct. 10) about why the City of Lethbridge should allow the organization to post anti-abortion ads.

In January, the LPL requested the judicial review of a decision by the City to reject five advertisements. That ads, which was revised four times and eventually contained an image of a fetus with the caption “Preborn Babies Feel Pain, Say No to Abortion“, was removed in April 2018. The City says it received numerous complaints opposing the ads posted on billboards, benches and buses around Lethbridge.

The Ad Standards Council of Canada also reviewed a complaint about the preborn babies ad. It concluded in May 2018 that the message “demeaned and disparaged women who have had or who are considering having an abortion, by implying women who decide to terminate their pregnancy intentionally inflict pain on their unborn fetus.”

The LPL says it’s been told by the City that it will not allow any such future ads due to “adverse community reaction” and the “heightened awareness to the LPL brand.” The pro-life group adds that the City also refused to listen to two petitions that garnered over 3000 signatures in support of the LPL’s right to freedom of expression.

Constitutional lawyer, Carol Crosson, told the court on Thursday (Oct. 10) that the City restricted the LPL’s freedom of expression by determining the opinion in the ads is incorrect, and furthermore, that the City has no business in making such a determination. She also argues that the ads were not intended to harm anyone, and that the City came to its decision to reject the ads due to a negative bias about the LPL brand.

Lawyer Michael Solomon, who’s representing the City of Lethbridge, says it recognizes that opinions in the community are divided on the issue of anti-abortion advertising and concedes that the LPL has a right to freedom of expression. However, the City considered a number of factors when it rejected the LPL ads, including how the advertisements are widely viewed and the accuracy of the claims.

The judge is expected to release his decision the week of Dec. 16.