Lethbridge parents will likely be forking out cash to have their kids ride school buses next fall.

City Council passed a resolution this week, which would end a 50 year partnership between the City and the Holy Spirit and Lethbridge School Divisions.

That deal has seen the City of Lethbridge provide school bussing, however a city-wide operational review recommended that come to an end.

“Lethbridge could be walking away from the current opportunity to model the ‘new standard’ in school bus operations being examined by the province,” says Gilmore. “We should be proud of being the only jurisdiction in North America that has a collaborative model that benefits the young residents of the city, provides reliable transportation and peace of mind to parents at no additional cost to the taxpayers of the city, including our parents.”

Gilmore says neither school district was consulted, noting this bussing model is something other districts in the province would like to follow. 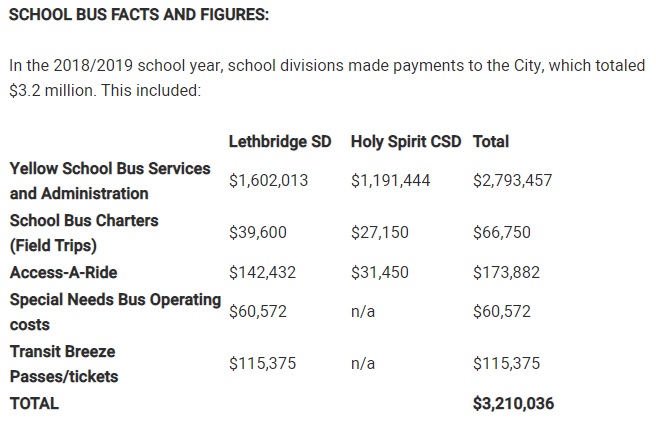 If the bussing contract though ends after June 2020, that forces the two district to look outside for bussing and with that will come a cost, passed down to parents.

Holy Spirit Superintendent Chris Smeaton says other districts around the province charge between $300-$500 a year per child for bussing.

“It certainly came as quite a surprise to hear that the collaboration that we’ve shared has been burdensome,” says Smeaton. “While the partnership has never been about making a profit, it has always been our intent that it operates on a cost-recovery basis.  We’ve never been told that this has not been the case.  In fact, we were just informed by the City that the surplus funds from the previous year’s operations would help decrease our overall costs for the upcoming year. If this is somehow in error, we are certainly wanting to listen and respond.”

Smeaton notes with the lateness of this decision, it’s going to be very hard to find a bussing contractor that’s going to be able to operate in this same level of funding. He says if we don’t have that, fees will be requested from parents.

In a joint district news release, the two school divisions say historically, the five decades of joint bussing services has been beneficial to all of the partners involved. For the City, the current fleet is used to its maximum capacity and a culture of ridership is encouraged for future regular transit use. The school divisions are able to operate more efficiently with the shared system, ensuring they have balanced transportation budgets. The result is parents have not been charged a transportation fee for students living 2.4 kilometres or more from their resident school, though Holy Spirit has had to charge a transportation fee of $20/month for elementary students transported from 1.2-2.4 kilometres.

Smeaton said Tuesday parents in Lethbridge “should be outraged”.

Both Gilmore and Smeaton plan to make a presentation to City Council’s Community Issues Committee on Monday, December 2nd to speak directly to Councillors.