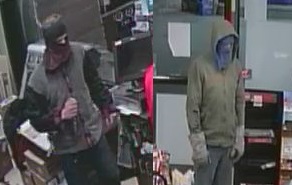 Nanton RCMP are investigating an armed robbery at the Circle K in that community.

One of them brandished a knife while the other stole cash and merchandise.

The suspects are described as:

Officers say both suspects are estimated to be about 6 feet tall and in their early 20s.

RCMP are asking anyone who recognizes the suspects, or who has information on the robbery, to contact them or Crime Stoppers.