Calgary man charged after $40,000 in drugs and cash seized in south Lethbridge apartment 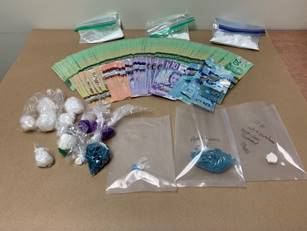 A Calgary man is facing drug trafficking charges after a significant quantity of meth, fentanyl, cocaine and cash was seized here in Lethbridge Wednesday night.

Lethbridge Police say a short term investigation by the Priority Crimes Unit resulted in a search warrant at an apartment in the 900 block of 15th street south on Sept. 30.

29 year old Samantar Hussein has been charged with three counts of possession for the purpose of trafficking and one count of possession of the proceeds of crime.