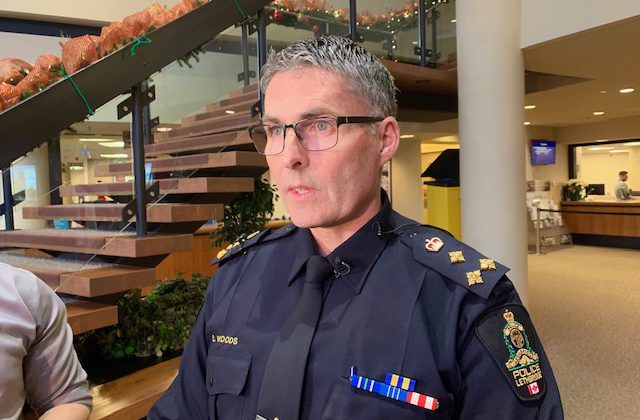 Just a month after informing City Council of his plans for a Crime Suppression Team, Lethbridge Police Chief Scott Woods says the new unit has now hit the streets.

The creation of the team involved redeploying officers from non-frontline areas to fill vacancies. Currently there are six members – one Sergeant and five Constables.

Woods says the goal is to target problem areas and unwanted behaviours and is confident this new policing unit will have an impact. “We have seen the ongoing effects of the drug crisis on our community and we’ve heard the concerns raised by our citizens,” said Chief Scott Woods. “The Crime Suppression Team won’t be a cure-all, but having dedicated resources to enhance our street presence and strategically target the spin off crime, public disorder and chronic offences that have resulted will have an impact.”

Last year (2019), there was a significant increase in calls near the Supervised Consumption Site and downtown core. The increase in calls included street robberies, assaults, thefts and commercial break-ins. In addition, police continue to respond to reports of disturbances, suspicious persons and property-related crimes throughout the city. As a result of the ongoing violence, property crime and drug-related offences, public perception of safety across the community has faltered.

Chief Woods says this Crime Suppression Team will actively target those issues. He notes these officers are committed to making a difference.