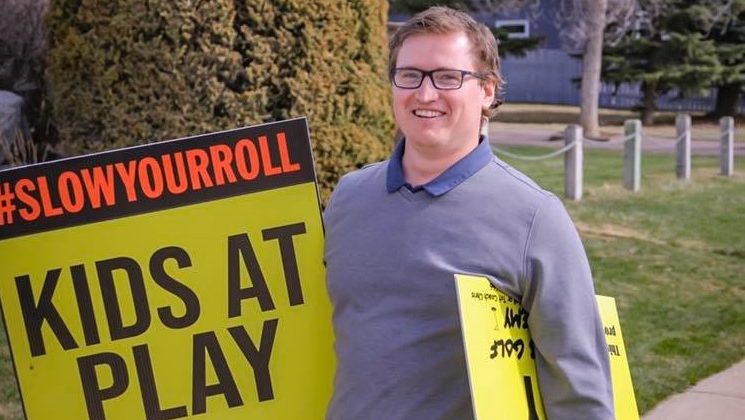 A Lethbridge resident is getting a lot of traction with a recent campaign aimed at getting people to slow down in residential areas.

Chris DiPasquale began #SlowYourRoll a few weeks ago after a young boy, Charles McIntyre, was hit and killed while crossing a street in a crosswalk near Copperwood on the west side.

This week he asked City Council for a $5,000 donation to make and give out signs which read “Kids at Play” to families who can’t afford them.

DiPasquale says this is all about creating positive change. “What we wanted to do is create widespread awareness in our communities for people just slowing down in general. See that kids weren’t in school and that they’re out playing everyday and neighbourhoods were filled with kids. We saw a stat actually that speeding has recently increased.”

Money generated from initial 150 sign sales, around $3,000 was given to the Mindful Munchies food program at the Lethbridge Food Bank.

DiPasquale says the signs are working and families are noticing people being a little lighter on the pedal in recent weeks. “We’ve got multiple messages from families just thanking us, saying they’re noticing a complete difference. The signs are bright yellow, they stand out, and the lettering is easy to read. I mean if anybody is driving and they see the words Kids at Play, they know there are kids there. The community outreach has been amazing, the response has been great, and the signs are working.”

On Tuesday, Lethbridge City Council received DiPasquale’s letter and request for the $5,000 donation for information and for potential consideration at future meeting.