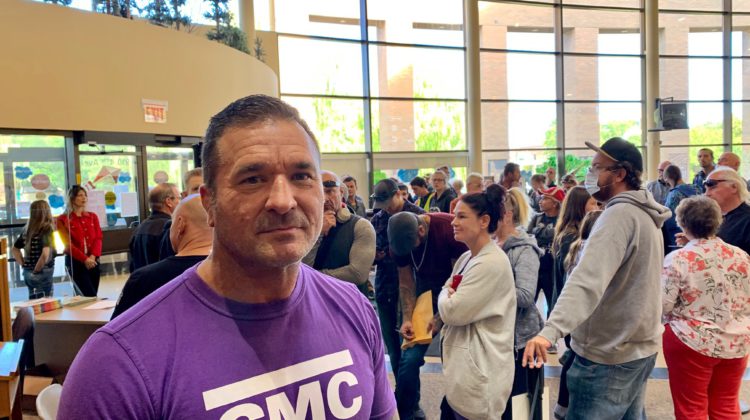 Lethbridge business-owner Lee Mein lead a group of 70 to 80 people into City Hall Monday to protest the temporary, mandatory masking bylaw. He says there is no scientific evidence for people to wear a mask. Photo credit to MyLethbridgeNow.com (Pat Siedlecki)

A group upset about the City of Lethbridge’s temporary, mandatory face covering bylaw wants it stopped.

City Council passed the bylaw two weeks ago as means to curb the spread of COVID-19. Similar bylaws are in place in Edmonton and Calgary, however the mask-wearing isn’t sitting too well with everyone.

Mein says there is no scientific evidence to prove wearing a mask does anything. “If this is such a big deal then why didn’t the province mandate it? Why didn’t the federal government do that? They haven’t done it because they know they don’t have anything to back it. They have no science to back what they’re saying, it’s just a suggestion. Show me you legally have a right to do this and then we’ll talk.”

Bylaw 6239, which passed third reading in a 6-3 vote August 24th, states that a face covering must be worn at all times while in an indoor, enclosed, or substantially enclosed public place or in a public vehicle. This includes places like malls, grocery stores, retail businesses, churches, taxi and ride-sharing businesses.

Mein lead the group into Council Chambers at the start of Tuesday’s meeting. The meeting was paused as Mayor Chris Spearman and a few members of Council got up and briefly left. The anti-masking group stayed in Chambers for a few minutes and spoke with Councillor Ryan Parker before leaving, with one person yelling “we’ll see you in court” as he left the room.

“This is interfering with people’s ability to communicate, socialize, it’s restricting businesses and causing problems with businesses. I’m healthy. I’m not going to get it. The science proves it. The numbers prove it. The average age of death with COVID is 83. The average death in Alberta is 82. People who are getting sick and dying are people who are dying from things already,” says Mein.