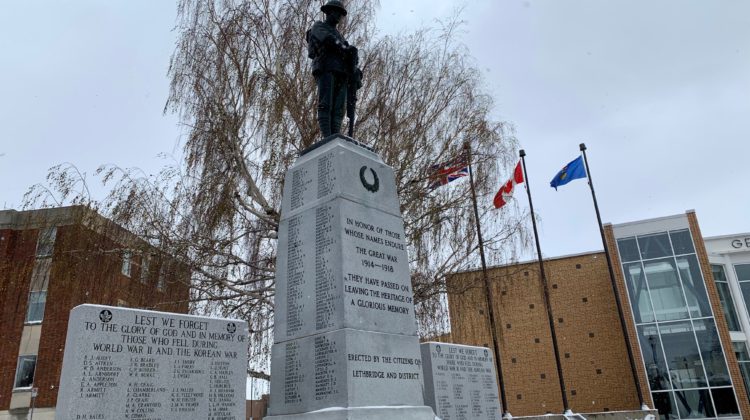 Wednesday is Remembrance Day and because of the ongoing COVID-19 pandemic, how we honour our veterans will look a little different this year.

A couple of ceremonies planned in Lethbridge at Mountainview Cemetery and at Battery Point at Henderson Lake were cancelled late last week.

There will however, still be a small ceremony at the Cenotaph downtown but only for a very select few.

He says “wherever you are, stop at 11 o’clock and pause for two minutes and be thankful for what he have here. In society, we don’t do that but when it first started after the war, the society at that time came to a complete stop.”

The General Stewart Legion Branch won’t be open Wednesday either as has been tradition in the past.

Information on Remembrance Day 2020 from City of Lethbridge:
• Due to COVID-19, the Royal Canadian Legion General Stewart Branch cancelled its ceremony at Exhibition Park
• There will be a scaled-back ceremony at the Cenotaph
• Additional precautions will be added including an area for no more than 100 people to be blocked-off and reserved around the Cenotaph and 25 chairs for Veterans in the reserved area
• The Legion is encouraging the public not to attend because of the space around the cenotaph because of social distancing and gathering size limits
• There will be an event livestream starting at 10:40 a.m. on Facebook through the Lethbridge Legion, General Stewart Branch #4
• The 429 City of Lethbridge Squadron will not be doing a fly-over, but local resident Geoffrey Brayne has volunteered to do a fly-pass in a Harvard Mark IV.
• The Military Museum is also scheduled to be open from noon until 4 p.m. on Remembrance Day.

On Nov. 2, Lethbridge City Council unanimously approved:
• To declare Remembrance Week from Thursday, Nov. 5 to Wednesday Nov. 11
• That the City fly the Poppy Flag with Flag Raising on Nov. 5
• During Remembrance Week, 4th Avenue between 9th and 11th Street South be named Veterans Avenue and a banner be installed on 4th Avenue (provided by the Legion) with costs funded by the City.

In-person services at City Hall moving online as of Monday