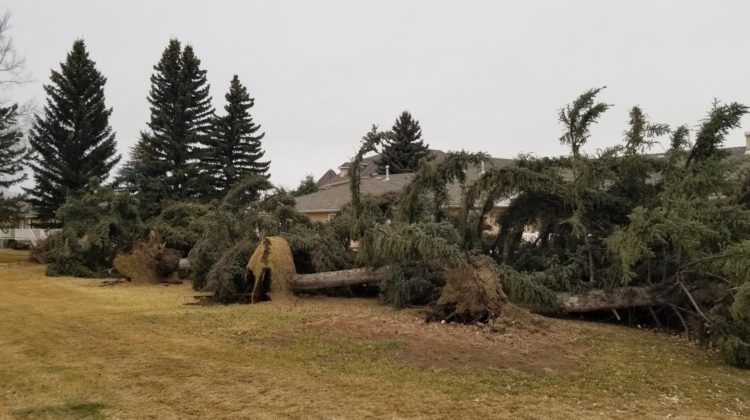 File photo. Trees ripped down in Taber during the wind storm on January 13, 2021. Photo credit to Kyle Brittain at The Weather Network

EDMONTON, AB. – It has been a very costly winter so far when it comes to damage caused by storms.

Severe weather across Alberta and Saskatchewan has caused more than $134 million in insured damage.

One between January 12th and 14th with strong wind across southern Alberta causing damage in the Lethbridge, Taber, and Calgary areas. That resulted in about $100 million in damage in the two provinces.

A week later, snowsqualls with extreme wind caused extensive damage. One wind gust west of Calgary was clocked as high as 193 km/h during that storm. The Insurance Bureau of Canada (IBC) says that resulted in downed trees and power lines, busted roofs, and damaged siding. Insured damage from that two day weather event was pegged at around $32 million.

“Once again severe storms have caused havoc in Western Canada,” said Aaron Sutherland, Acting Vice-President, Western and Pacific, Insurance Bureau of Canada. “These events are examples of the increasing impact of extreme weather and the need to increase investment in measures to adapt and better protect Canadians from coast to coast.”

Alberta has experienced more severe weather events over the past ten years than any other region in Canada.