Omicron to peak in Canada the next few weeks, hospital admissions 4 times December’s 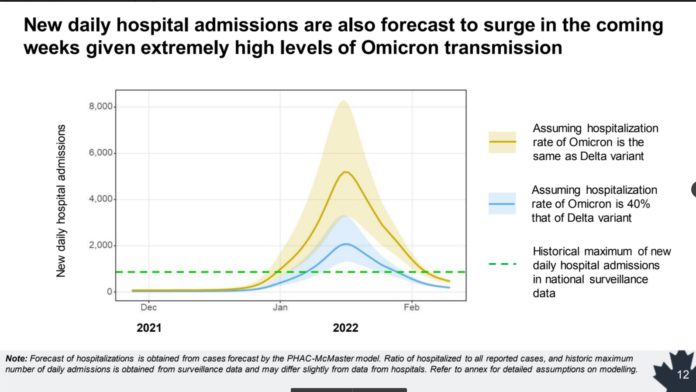 Several intense weeks of COVID-19 activity is the federal government’s forecast for Canada’s next two months.

That according to the Chief Public Health Officer who says the Omicron’s disease activity has eclipsed all previous waves/variants and is driving up severe illness trends despite being less severe than Delta.

Dr. Theresa Tam says hospitalizations are on the rise and are expected to continue, given the country’s record infection rates.

She says since Ottawa’s last modeling update just over a month ago, virus-related hospitalizations have more than quadrupled to nearly 7,000 a day with critical care admissions doubling to nearly 900 a day.

Tam says the federal government’s long-range projections have the country hitting the fifth wave’s peak in February with about 170,000 daily cases in the best case scenario and 300,000 in the worst case.

Tam says the short-term forecast has Canada adding over half a million new COVID-19 cases by the end of January.

As opposed to previous weeks when infection rates were highest among 5 to 11-year-olds who were just becoming eligible for vaccination, she says incidence rates are now higher among Canadians aged 20-39 years.

***With files from Mo Fahim