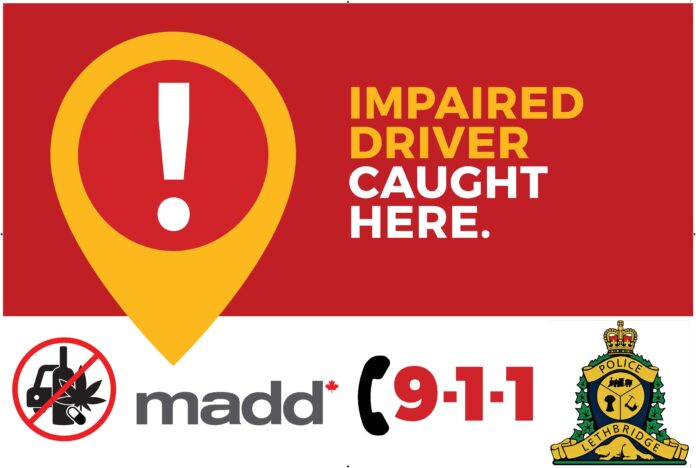 Lethbridge Police and MADD have teamed up as part of an awareness campaign to encourage the public to report suspected impaired drivers by calling 911.

Starting in May, residents will see mobile ‘Impaired Driver Caught Here’ signs throughout the city at locations where police have apprehended impaired drivers and charged them with a Criminal Code offence or issued an Immediate Roadside Sanction. The signs are intended to show that impaired driving happens in all areas of the community and encourage the public to call 911 if they observe a driver they suspect is impaired by drugs and/or alcohol.

“Impaired driving can and does happen anywhere. These signs will bring awareness to the public that an impaired driver was caught possibly close to their work, school or even in their neighbourhood” says Anita Huchala, President of MADD Lethbridge, and Area Chapter. “Making that call to 911 if you suspect an impaired driver could save a life or prevent someone from being injured in an impaired crash.”

The signs will be moved to new locations every other week based on new impaired driving charges. For more information on the locations go to www.maddchapters.ca/lethbridge and click on ‘Mobile 911 Sign Program.’

The campaign was first launched in Canada in Saskatchewan. Lethbridge is the first Alberta city to adopt it, with the support of MADD Canada and Alberta Transportation.

“The Lethbridge Police Service is committed to ensuring our streets are safe for everyone,” says Acting-Sgt. Brent Paxman of the Traffic Response Unit. “We appreciate our partners like MADD, who highlight the impact impaired driving can have on our community and the significant risk to public safety they pose and encourages other drivers to report suspected impaired drivers they might encounter, when safe to do.”

Every hour in Canada, an average of 10 criminal code charges or short-term licence suspensions are laid for alcohol or drug-impaired driving.